The Risorgimento and Resistance Museum Collections 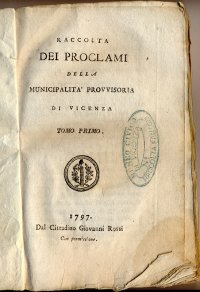 The collections held by the museum are a unique, national wealth. The main nucleus consists of printed publications, periodicals, newspapers, manuscripts, portraits, pictures, prints, books, proclamations, decrees, private deeds, coins, medals, decorations, military and geographical maps, firearms, bayonets, swords, uniforms, flags and various kinds of military object. The most historically important collection is undoubtedly the Gabriele Fantoni Collection, donated to Vicenza in several stages between the end of the nineteenth and the beginning of the twentieth century.

The Fantoni Collection of the National Risorgimento, particularly regarding the Veneto from the end of the eighteenth century to the end of the nineteenth, contains many records – announcements, notices, proclamations – of the political, legal and administrative power of the Venetian Government of 1848-9. The autographs and documents that offer biographical details on many of those who defended Venice during the Austrian siege are noteworthy; as are the collections, many unpublished, of patriotic hymns, poems and songs, mainly written by minor authors, along with satires and humorous publications that cast new light on the general feeling at the time. The complete collections of many Venetian periodicals and newspapers from 1848-9 and the correspondence relating to the Veneto-Lombardy political committee for the years 1860-6 are also of interest. The printed material is completed by more than 4000 pamphlets, many very rare, published in the second half of the nineteenth century.

Description of the main collections