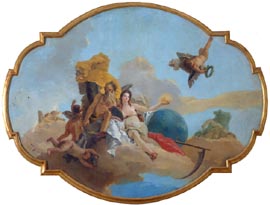 This large canvas, painted by Giambattista Tiepolo around the mid-Forties of the eighteenth century, arrived in the Gallery in 1928.

The work, from the palace that the well-known lawyer Carlo Cordellina had built in Contra’ Riale in Vicenza, had originally been conceived as a grandiose ceiling decoration for one of Cordellina’s other properties: the villa at Montecchio Maggiore, frescoed by Tiepolo between 1743 and 1744, or the palace in Vicenza in Stradella Piancoli, or the one in Venice in Campo San Maurizio.

Here the artist represents one of his favourite allegorical subjects. The young woman, languidly posing next to a globe of the earth on a soft carpet of clouds, represents Truth, who is holding a mirror in her right hand, while her left supports the disk of the sun, symbolising the light of Reason. The naked, soft sensual body of the young woman is clasped in the arms of Time, represented according to allegorical tradition as an old man, whose wrinkled skin contrasts distinctly with the girl's smooth rosy flesh. Having cast aside the sickle with which he is usually depicted, Time looks, frowning, towards some particularly lively putti that have just stolen his hourglass, while in his right hand he holds a palm leaf, alluding to Truth. On the right of the painting, below a putto with a laurel wreath, appears Falsehood, dazzled by the blinding light of Truth.

The image, rendered with a bright and luminous chromatic structure, therefore alludes to the moral virtues of fairness and justness that inspired the activity of Cordellina.

This work belongs to the exhibition route: